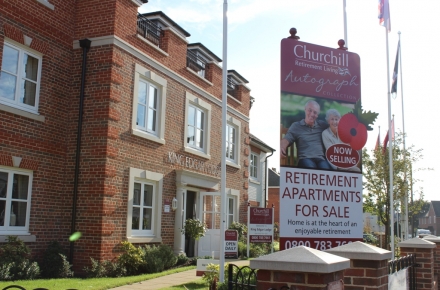 The Churchill Foundation is enabling Owners at retirement living developments across the country to take part in the Royal British Legion’s Poppy Appeal over the coming weeks. Poppy boxes and donation tins will be appearing at over 60 Churchill Retirement Living lodges and developments managed by Millstream Management Services, with proceeds going to the Armed Forces charity.

Each year in early November an army of volunteers distribute the Royal British Legion’s iconic paper poppies throughout the nation, collecting donations in return to help support the vital work the charity does for the Armed Forces community. Churchill and Millstream Owners and their visitors will be supporting this endeavour and wearing the poppy as a symbol to remember the fallen service men and women killed in conflict.

Churchill Retirement Living has a strong connection with the Royal British Legion, with many of its Owners having vivid childhood memories of the Second World War and close friends or family members who fell in battle. As well as selling poppies, many Churchill and Millstream lodges will be holding Remembrance Day services and inviting friends, family, schools and community groups to help mark this important date in the calendar.

Spencer McCarthy, Churchill’s Chairman & CEO and a Trustee of the Churchill Foundation, said: “We are proud to be supporting the Poppy Appeal this year and are looking forward to seeing our Owners join together with their local communities to commemorate the many sacrifices our Armed Forces have made for us. This year’s appeal is asking the nation to Rethink Remembrance by recognising the sacrifices made not just by the Armed Forces of the past, but by today’s generation too, so we hope to spread that message and raise as much as possible for this excellent cause.”

The Churchill Foundation is a registered charitable trust, with Dame Esther Rantzen DBE as its Patron. The Foundation enables Churchill to support the many local communities where it works, and give to a wide range of charities based on three core areas: the relief of sickness, disease and human suffering; the promotion of health amongst the elderly; and the support and wellbeing of the young. To find out more visit www.churchillfoundation.org.uk.