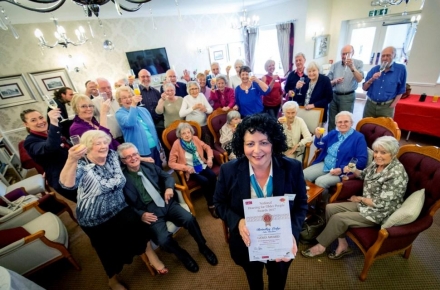 Brindley Lodge in Sale took the highest honour with a Gold award, and Grange Lodge in Portishead achieved a Silver Award, setting them apart from thousands of nominated retirement housing developments nationwide.

The awards were presented at a celebration on 16th May 2017 at Edgbaston Cricket Ground, attended by owners from both Brindley Lodge and Grange Lodge along with members of the MMS team.

Simon Crewe, Managing Director of MMS, said: “Our philosophy is to put our customers at the heart of everything we do, and we’re delighted to have not one but two of our developments achieving such prestigious national awards, and six more being highly commended. Since they’re voted for by our Owners, staff, visitors and volunteers, it shows that everyone is very happy with the way we’re managing these developments.”

John Galvin, EAC’s Chief Executive, explained the importance of the awards: "Specialist housing for older people plays an enormously significant role in helping them stay independent for longer. The security, support and great communities have a positive impact on individuals and reduce the need for NHS services.”

The EAC Awards, now in their 7th year, celebrate the best specialist housing for older people, and aim to help shape the future of housing in later life through engaging over ten thousand residents, staff, visitors and volunteers who were all able to vote for their favourite scheme out of the 1,180 nominated between 15 November 2016 and 28 February 2017.