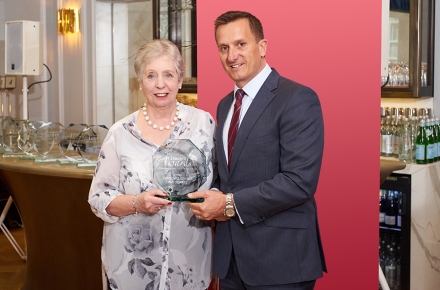 It was a star-studded affair at this year’s Churchill Awards, with famous faces including former England football manager Lawrie McMenemy MBE, actor Sir Roger Moore KBE and TV presenter and journalist Dame Esther Rantzen DBE walking the proverbial red carpet. Judges, winners and their guests gathered at the Mandarin Oriental Hotel in London for a VIP event to recognise the outstanding achievements of individuals aged 65+ who continue to push society’s perceptions of age.

Held in The Roseberry Suite at the prestigious Mandarin Oriental, overlooking Hyde Park, the relaxed afternoon kicked off with a sumptuous lunch prepared by top chefs at the hotel’s world-class restaurant.  And while the wine flowed, the afternoon turned to the very important task of honouring the winners in each of the 12 specialist award categories.

Awards were presented by Churchill Retirement Living’s Chairman and CEO, Spencer McCarthy, who was joined at the event by each of the category judges to congratulate the winners as they collected their awards.

This year, the judges had a particularly tough time, as more and more over 65s continue to push the boundaries of age. However, after much debate, the winners of the 2015 Churchill Awards were announced as follows:

Owners in Millstream-managed Churchill developments were also given the opportunity to nominate a fellow Owner who they believed to be a worthy winner for their work in both the Lodge and the local community. This year’s winner was Pat Duarte of St Richards Lodge, Chichester for her avid work volunteering for the RNLI.

Now in its fourth year, the Churchill Awards, which run in partnership with The Telegraph, are designed to honour the work of the UK’s over 65s and celebrate the significant role older people have to play in British society. The awards recognise specific achievements made by individuals in the last 12 months.

Spencer McCarthy, Chairman and CEO for Churchill Retirement Living, comments: “Despite the vast majority of over 65 year olds remaining active and valuable contributors to society, as a group the older generation feel their views are being overlooked. They are viewed as simply old – not as ex-war heroes, ex-Olympic athletes, previous captains of industry or lifelong teachers and nurses.

“Increasingly however, the over 65s play an important role in all realms of society – in politics, art and scientific research for example, older people are still at the forefront of excellence in their field. As a group, the older generation has an awful lot to still offer to society and the Churchill Awards are designed to honour and recognise this very valuable and real contribution.”