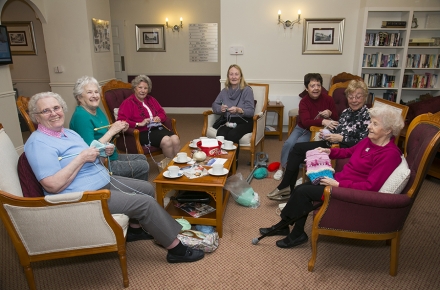 A group of 14 ladies from Brindley Lodge in Sale have formed a knitting group which has now produced more than 400 handcrafted items for charity.

Over the past few months the Owners have knitted hooded blankets, vests and hats to send to Africa and created 120 tiny bobble hats for Innocent Smoothie bottles to raise money for Age UK.

The clothes and blankets will be sent to the so-called ‘fish and chip babies’ in Malawi, where more than half of the population lives below the poverty line. Families have little or no money so the babies, many of whom are born with Aids, are sent home from hospital wrapped in newspaper, hence the name ‘fish and chips babies’. The hats will appear on Innocent bottles and will raise 25 pence for Age UK for every bottle sold.

Owner, Joan Shea, who is 86, said: “We formed our Knit Together group a year ago now and I hadn’t knitted for nearly 50 years when we first got together, but I thought I’d have a go. Now, more than a year later we’re still meeting up fortnightly to knit for different charity appeals.

“It’s such fun. We have a good laugh and a chat and it gets us all together. There are even a few members of the group who don’t knit but come for the social aspect – they help sewing up the items or coming up with ideas for projects.  As well as the fish and chip baby appeal and the bobble hats for Age UK, we have also knitted over 100 premature baby hats for the St Mary’s Hospital. We’re now working on our next project which is making Twiddlemuffs for people suffering from dementia.”

Anne Smith-Brady, Lodge Manager at Brindley Lodge, which is managed by Millstream Management Services said: “The Owners at Brindley Lodge find it so rewarding to come together and knit. Many of them had previously knitted and have now started again. It is a great way to meet people and spend the afternoon socialising, whilst doing something for such a good cause.”