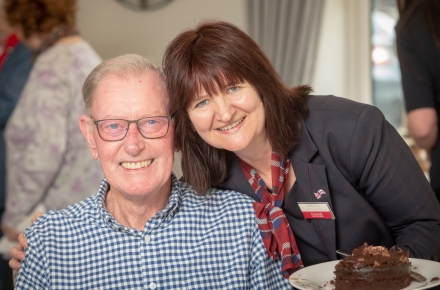 Warming Mornings raise over £8,500 for local charities across the country.

Churchill and Millstream have raised £8,789 this year through our special Warming Morning events at Lodges all over the country, benefiting 44 different charities chosen by our Owners.

During February and March we called on local communities to step in out of the cold and into the warmth of our Owners’ Lounges to enjoy hot drinks and indulgent snacks in return for a small donation to a local charity.

Events were held at 44 Churchill developments all the way from Cornwall to Merseyside, with 100% of the money raised going towards a range of local charities chosen by Owners.

Betjeman Lodge in Ludlow achieved the biggest fundraising total with an impressive £540 towards the Midlands Air Ambulance charity. Churchill’s own charitable arm the Churchill Foundation will match-fund this amount, meaning the charity receives a total of £1,080.

The Lodges with the highest fundraising totals across Churchill’s three other regions will also be matched by the Churchill Foundation, doubling the amount raised for their respective charities:
• Sachs Lodge in Torquay (South West) - £700 for Torquay League of Friends
• Keyes Lodge in Dartford (South East) - £835 for Ellenor Hospice
• Cooper Lodge in Frinton-on-Sea (Eastern) - £400 for Parkinson’s UK

Spencer McCarthy, Churchill Retirement Living’s Chairman & CEO, said:
“We’re delighted to have raised such an impressive total through this year’s Warming Mornings events. 100% of the money raised will go towards local causes chosen by our Owners, supporting the vital work these charities do in their local communities. I’m proud to say the Churchill Foundation will also match the amount raised by our four top fundraisers across the regions, and a special well done to Betjeman Lodge for achieving the highest total. I’d like to say a big thank you to all our Owners, Colleagues, Lodge Managers and members of the public who took part in these events and helped make them such a success.”